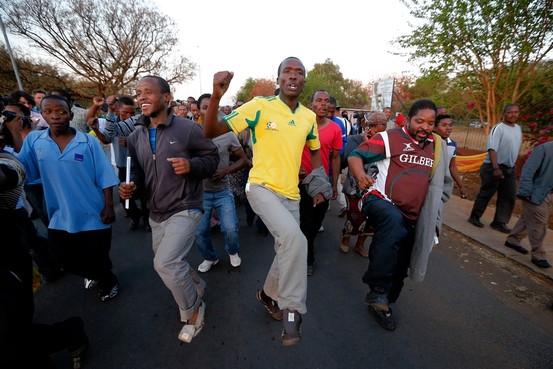 Platinum miners outside of Rustenburg, a few hours northwest of Johannesburg, have organized wildcat strikes to demand a living wage.

As a consequence, on August 16th, South African police massacred at least 34 miners and injured 78 more.

Actions and Events in SOLIDARITY WITH THE STRIKING MINERS are being held around the world.

Far from advocating for workers’ rights, the largest mining union in South Africa, the National Union of Mineworkers (NUM), has openly denounced the strikers, urging them to return to work and even blaming them for last week’s violence.

Statements from President Zuma, COSATU, NUM, and the SACP blame murdered workers for their own deaths.

Why is the NUM leadership, the COSATU leadership, and the SACP refusing to denounce this ANC-ordered massacre? In some cases they are openly endorsing it.

Sections of the working class struggle are engaged in open class war.

For a graphic video of the incident, see: http://www.youtube.com/watch?v=Qf6Oi2bR56E