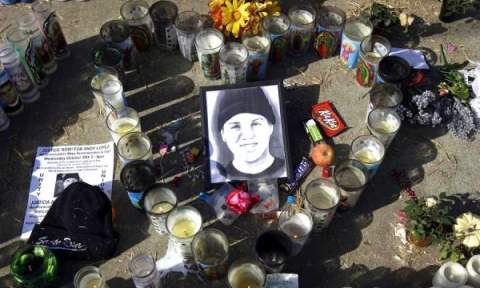 How to Fund an American Police State: Real Money for an Imaginary War

Speak your mind: Are today’s cops too militarized?
Jan 05, 2012  from PoliceOne.com

A reader emailed me the other day, concerned about some of the changes he’s seen in law enforcement since he retired four years ago as a county constable in Mississippi. His letter appears below.

How would you respond to the observations and questions he poses?

The Killing of Cheri Lyn Moore

The killing of Cheri Lyn Moore on April 14, 2006 tragically illustrates the failures of a misguided and bureaucratized “public safety” system. In this writing we deliberately refer to Cheri Lyn Moore by her first name, as her friends and family do, and we acknowledge her as a real, feeling, dynamic human being; we want to counter the objectifying and criminalizing  references made by media and police, calling her "Moore", and devaluing her life by repeatedly describing her through only the claims made by the police who murdered her. Cheri was reaching out for help in a time of physical, psychological, and emotional crisis; however, rather than receiving the assistance and comfort that she needed, she ultimately met her death at the hands of an overzealous and militarized police force.

This is not an isolated incident: Eureka Police Department [EPD], much like many police outfits throughout the country, regularly criminalize people in mental and emotional crises (especially if those people are poor) and then often exaggerate or flat out lie about danger they were "threatened with" in order to justify killing or severely harming those civilians.  One remarkable distinction, however, between EPD and many other police departments who's officers are suspected or known to have used excessive violence or lethal violence, is the patent and utter refusal of EPD or the City of Eureka to fire, reprimand, or demote such officers- even if only for the purpose of instilling confidence in the communities which they 'police'.  Because EPD routinely ignores, downplays and covers up instances of wrongful and unjustified use of force, there is a climate of indulgence in the department, whereby officers – and particularly those with predilections for over-aggressiveness, violence and abuse of authority, feel free to violate peoples' rights while on duty, because they are confident no disciplinary consequences will arise.

What Happend to Peter Stewart

WHAT HAPPENED TO PETER STEWART

Liles Gets Burgess Family Evicted From Home; He Targets His Victim's Families

To Chief Garr Nielson and all to whom it may concern:

Liles Gets Burgess Family Evicted From Home; He Targets His Victim's Families

REDWOOD CURTAIN COPWATCH     December 9, 2007
To Chief Garr Nielson and all to whom it may concern: