School police officers in Texas are doling out more tickets to children as young as 6, who under past disciplinary practices would have been sent to the principal's office instead, according to a report by a Texas nonprofit.

"Disrupting class, using profanity, misbehaving on a school bus, student fights, and truancy once meant a trip to the principal's office. Today, such misbehavior results in a Class C misdemeanor ticket and a trip to court for thousands of Texas students and their families each year," says the Appleseed Texas report (PDF). It examined data from 22 of the state's largest school districts and eight municipal courts.

The study found that where a child attends school -- not the severity of the allegation -- was the best indicator of whether the child would be ticketed instead of sent to the principal's office. Black students and special education students were overrepresented among those ticketed.

Most Texas schools have police officers, and that staffing is on the rise. The most common infractions earning misdemeanor tickets: disorderly conduct and leaving school without permission.

Appleseed recommends  that Texas ban ticketing for children under 14.

Here's a graph from the report showing how increased police presence resulted in increased ticketing over time in five districts: 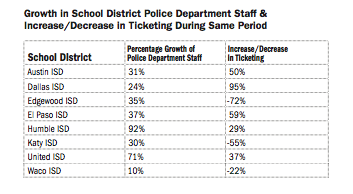