Derrick Jones Didn't Have To Die! [photos, then article]

In the face of brutality and repression, there is a mood of resistance in Oakland that is building.

During the rally at the Fruitvale BART Station, where Oscar Grant was murdered, this youngster had the courage to wave a flier for Derrick Jones in the faces of the Oakland police “protecting” the station from the protesters. – Photo: Felix Barrett

Derrick Jones with his little daughter, Demi. She grew up at Daddy’s barber shop, where he cared for her every day while her mother worked. 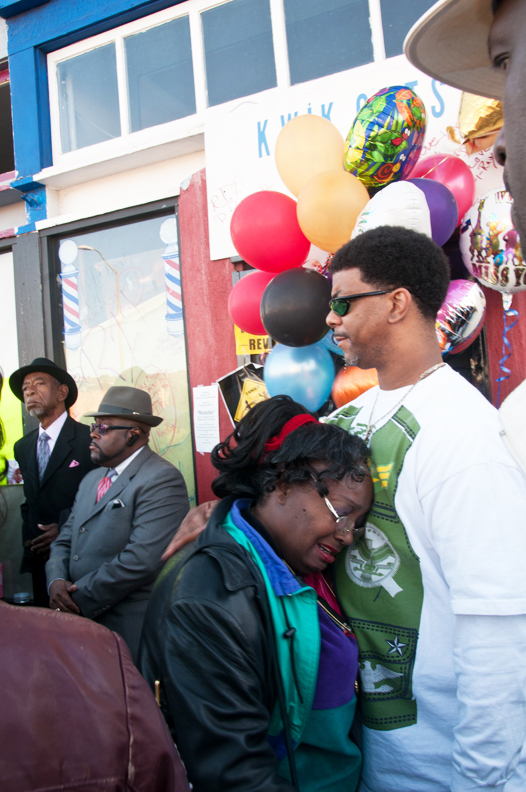 Outside Derrick Jones’ barber shop, friends mourned the tragic and senseless loss of their friendly neighborhood barber who looked out for everybody. – Photo: Felix Barrett 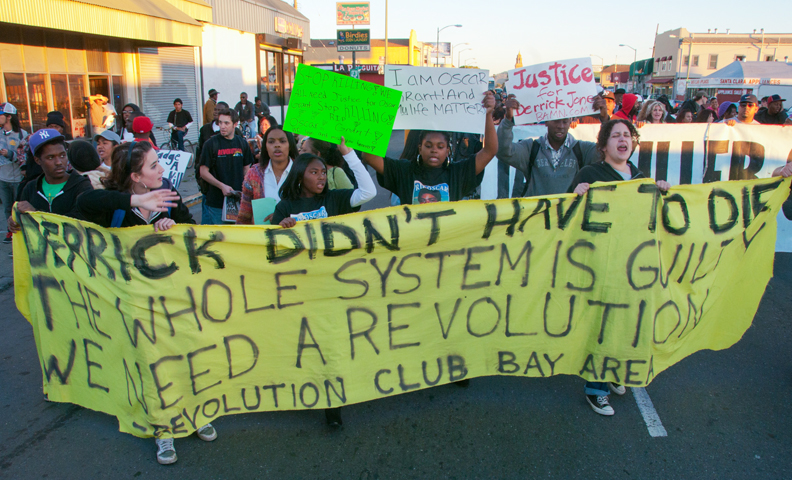 Hundreds marched behind this banner 30 blocks from Derrick Jones’ barber shop to the Fruitvale BART Station, where supporters of Oscar Grant and Derrick Jones, who was murdered only three days after Oscar Grant’s murderer, Johannes Mehserle, was given a slap-on-the-wrist sentence, amounting to only seven months with credit for time served and “good behavior,” rallied together against police terrorism. – Photo: Felix Barrett

Just days after Johannes Mehserle was given a mere two-year sentence for the cold-blooded murder of Oscar Grant (see “Token Sentence for Oscar Grant’s Killer: Anger in the Streets of Oakland”), another unarmed Black man has been killed by police in Oakland. On Monday, Nov. 8, two cops from the Oakland Police Department (OPD) shot and killed Derrick “Dee Dee” Jones, an act that drew immediate outrage.

As word spread, dozens of people gathered at his place of business and tens more outside his family’s home in somber vigil. All afternoon people were driving up and getting out of their cars to embrace Derrick’s family, offer their assistance and condemn the killing.

Derrick Jones was well known and well loved in the East Oakland community. His barber shop was also a popular spot for people in the neighborhood young and old. A place to chill, talk and eat the BBQ that Derrick prepared on his hibachi. One young girl who used to hang out at the shop told us, “I miss him already. I hurt. We all do. He did not deserve to die.”

All of the facts are not yet known, but what is known is that police were called to the barber shop because of a “domestic dispute.” Two cops confronted Derrick at his shop and then chased the unarmed man around the corner where they shot him multiple times in the chest, in a residential alleyway lined with houses and apartments.

Police said they first used a taser but that Derrick ran away and they pursued him and shot him. They said they started shooting because they thought he was “reaching for his waistband” and that they saw something “shiny” in Jones’ hand, something they now claim was just a small scale. They also now say that a small amount of marijuana was found on Jones. As if that justified anything!

One woman said it sounded like a gun fight and asked, “Why would you shoot like that? You have families staying here.” Another man looking at the sidewalk memorial shared his memories of Dee Dee, saying, “This ain’t nothing new, killing a black man in Oakland. We’re tired of them taking our lives. This has to stop!”

Derrick’s sister Tonya, a recent law school graduate, told the media: “My brother was murdered. And we will prove it.” She also recounted that this was not the first time that the family or Derrick had been the victims of police brutality and that when Derrick was 16 he had been falsely detained and accused of stealing his own motor scooter, and when they brought Derrick home, police then had assaulted one of his sisters, and that the family had sued the OPD and caused two cops to be fired. Like Oscar Grant, Derrick Jones leaves behind a small daughter, and many, many friends. Once again there is a jagged hole in the heart of a community. Once again a life full of potential, stolen by this system’s enforcers. ENOUGH IS ENOUGH!

On Nov. 11, people in Dee Dee’s neighborhood, his family and friends, members of Oscar Grant’s family and people who have been fighting for justice in that case, revolutionaries, community organizers and religious leaders gathered at Derrick’s Quik Kuts barber shop 200 strong. The march took off at a fast pace, and the 30 blocks to the Fruitvale BART station – where Oscar Grant was murdered in 2009 – seemed to fly by. Copies of Revolution newspaper were snapped up, both by those in the march and people along the sides. A woman came up to a Revolution distributor and told her how her uncle had been killed by Oakland police a few years ago and there had been no protest but there should have been. She waved the newspaper in the air, punctuating her point that immediate protest and much more is needed.

There was a defiant mood in the streets as the relatively small march spread out, taking up the whole of the width of the boulevard. The Revolution Club carried a banner that read: “Derrick didn’t have to die. The whole system is guilty. We need a revolution.” Many people responded to the slogan “The Whole System Is Guilty” and there was fertile ground for spreading the word that another system was possible.

When the march arrived at the BART station, the crowd chanted their demand that the police who shot Derrick be arrested. The station was shut down. As people spoke at an impromptu second rally, the clash of programs among those who were protesting was evident, with some promoting stale reformism, others preaching against rebellion, and revolutionaries putting forward revolution as the solution to the great crime and epidemic of police brutality.

The next day, on Friday, 50 people returned to the street where the incident began to protest again. After the rally broke up and people began to leave, police stopped and arrested and cuffed one of Derrick’s brothers several blocks away. This is an outrage on top of an outrage.

In the face of brutality and repression, there is a mood of resistance in Oakland that is building. One of his friends told us: “Dee Dee was a good man … I was in jail for a year. I got out of jail, and Dee Dee was the only one I wanted to cut my hair. He’d take his time and made sure you looked good

… I’m gonna speak out, and I’m gonna resist. I’m on probation. They can lock me up but I will not be quiet.”