Killer cop gets away with murder

Cephus Johnson, Oscar Grant’s Uncle Bobby, spokesman for the family, speaks to the press outside the Los Angeles courthouse after the “slap on the wrist” sentence was handed to killer cop Johannes Mehserle. “I knew what the judge was going to say even before he said it. This whole thing was argued before we got here today,” he declared, according to the San Francisco Chronicle. – Photo: Noah Nelson, Youth Radio

Today we had a gross miscarriage of justice. Judge Robert Perry threw out the gun enhancement clause that could have added 10 years and then gave Johannes Mehserle a sentence of two years with credit for 292 days for time served.

Rally today at downtown Oakland at 2 p.m. Shame on Mehserle, the judge and any police officer who sat back and allowed this to take place without speaking out.

Today was not a good day. It makes you wonder if there even is a such thing as JUSTICE. Maybe it doesn’t exist. Maybe we been hoodwinked and bamboozled.

Lemme know if someone knows where JUSTICE is at?

Eric Holder? President Obama? Why are you guys in office if you’re not gonna make sure justice is carried out. 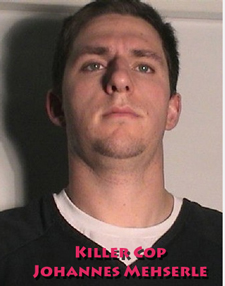 This man got two years with credit for time served for shooting an unarmed, subdued man at point blank range.

We should also remember that earlier today, Neo-Nazis showed up at the LA courthouse and started funk with Black folks, in particular the Black Riders. One Neo-Nazi was arrested while three Black Riders were arrested. Yep, the racism was thick both on and off the bench.

Here are two heartfelt speeches to give folks better context as to what’s at stake. The first one is from Oscar Grant’s “sister in law,” the aunt to his daughter Tatiana. It’s a letter to Judge Robert Perry where she breaks down how his death has impacted the family.

The second is from Minister Keith Muhammad, who has been on the case from day one. He sums up everything that has happened and what we are ultimately seeking: Justice.

Listen to Davey D on Hard Knock Radio Monday-Friday at 4 p.m. on KPFA 94.1 FM or kpfa.org. Visit his website, daveyd.com, and his blog, Davey D’s Hip Hop Corner, where this story first appeared. 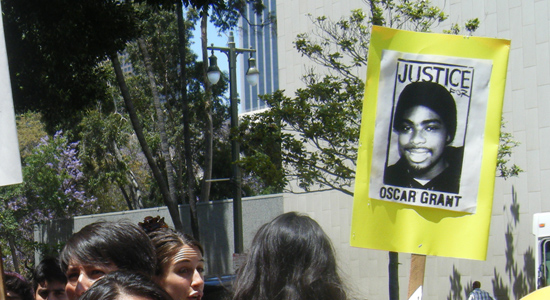 Supporters of justice for Oscar Grant rallied outside the courthouse during the sentencing hearing for his murderer, former BART police officer Johannes Mehserle. – Photo: Youth Radio

This summer, Mesherle was found guilty of involuntary manslaughter. The case was moved to Los Angeles after large street demonstrations and riots followed the shooting. After more than a year and a half of legal wrangling and community unrest, Judge Robert Perry has just issued a sentence in the case of Johannes Mehserle, the former BART police officer found guilty of involuntary manslaughter in July for the Jan. 1, 2009, shooting of Oscar Grant in Oakland.

Johannes Mehserle was sentenced to two years in prison, a fraction of the maximum sentence he could have received. Judge Perry gave double credit for his time served, bringing the total to 292 days of credit. Mehserle could have faced between four and 14 years for the charge, but legal analysts widely speculated the sentence would be on the shorter end of that spectrum. Involuntary manslaughter charge carries a maximum of four years in prison, but a gun enhancement could have added an additional 10 years.

Analysts seized on the disparity between the sentence and the enhancement, arguing that involuntary manslaughter suggests an accidental killing but that the gun enhancement suggests intentional use of a deadly weapon. That discord meant that Judge Perry could draw a wide range of interpretations based on the jury’s findings.

The incident lead to multiple violent protests in downtown Oakland and stirred up racial tensions and the city’s long history of unease between the police and the community. Mehersle, a white man, was videotaped from multiple angles, shooting Grant, an unarmed Black man, on the Fruitvale BART platform.

Protests are scheduled in Oakland today. City offices are closing early and many businesses are shutting down early in advance of demonstrations. Unlike the July verdict when members of the community and media widely anticipated violent outbreaks, no one is quite sure what the community’s response might be today. Some businesses had boarded up their windows in advance of today’s sentencing but only a fraction of those that shuttered this summer for the verdict.

The final chapter in the case has yet to be written. It’s widely expected Mehserle’s attorney will appeal the verdict.

Nishat Kurwa, as news director for Youth Radio, where this story first appeared, leads a team of adult and youth staff producing across Youth Radio’s broadcast and online outlets. Before coming to Youth Radio, she was the producer of KMEL’s public affairs show, Street Knowledge with Davey D, and is currently also a news producer at KCBS Radio in San Francisco. In 2002, she was the co-creator and executive producer of KPFA’s Islam Today, the first program by and about Muslims on U.S. public radio. In 2004, Kurwa was named a Salzburg Seminar Fellow. Contact Youth Radio at 1701 Broadway Ave., Oakland, CA 94612, (510) 251-1101, youthradio@youthradio.org.

Hosted by Davey D, produced by Minister of Information JR