Mumia’s birthday is April 24 and we would like to celebrate a gigantic Freedom Birthday Remembrance for Mumia Abu-Jamal.

Please join Pam and Ramona Africa and all who love and admire Mumia by avalanching him through the month of April with Freedom Birthday wishes. And, to those who can afford to, please send a few dollars through postal money orders. This would be helpful when he is released. 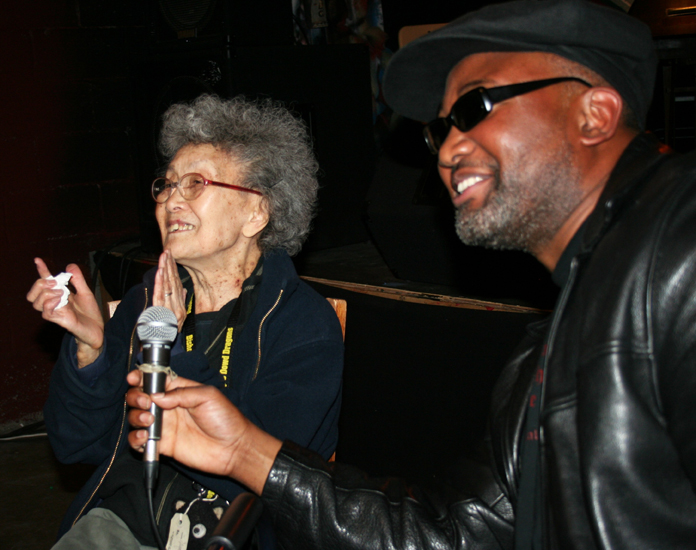 Yuri Kochiyama, shown here with POCC Chairman Fred Hampton Jr. as they speak to the crowd at the Black New World in West Oakland in 2008, was interned during World War II with other Japanese Americans and has been fighting for freedom ever since. In 1960, living with her husband and children in Harlem, she met Malcolm X and worked closely with him until his death. She was present when he was assassinated and cradled his head in her lap as he lay dying. Now a resident of Oakland, her passion and courage burn as brightly as ever. “The Revolutionary Life of Yuri Kochiyama, Heartbeat of Struggle,” by Diane C. Fujino was released in 2005. – Photo: Minister of Information JR

Remember what Mumia has endured at the hands of the U.S. government and the Pennsylvania criminal justice system. Mumia has already done 32 years and is still on death row because of prosecutorial misconduct. Yet he is innocent! Act now before it is too late.

Don’t let Mumia become another victim of a government’s destructive history. Mumia’s life is in peril and must be saved. He is needed to teach us how to fight for a better world for all. If ever Mumia was needed, it is now!

Join us in celebrating Mumia’s birthday and let it be a celebration for Mumia’s freedom!

Remember we need him more than he needs us. We need him, not only for today, but for all the tomorrows coming. Join us. Write to Mumia now.